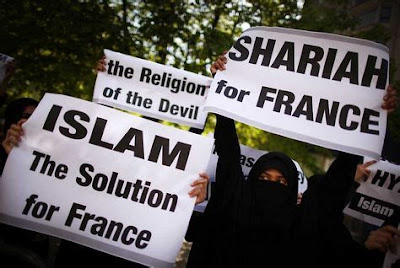 In modern times French President Sarkozy alone has been brave enough to ban the Muslim veil (hijab). He sees that radical Islam is hell bent on dominating France, destroying the Christian historic culture and replacing it with a tyrranical Muslim hegemony under strict Islamic law (sharia). The new leader Hollande is a liberal socialist. The liberal socialists have done more harm to modern Western civilization  than any other force. They peel away traditional Judeo-Christian morality, set laws to liberalize (legalize sin) the land and allow misguided immigration policy to eat away at the historic culture like a cancer virus. Once this process is complete society is destroyed and another belief system (such as Marxism, Islam, or secular humanism) takes preeminence. I weep for France!

Some Muslims in France were caught demonstrating in support of the Toulouse killer Mohammed Merah! Imagine that, to march in support of a mass murderer. This is totally Satanic!

I fear we will soon face in France another Battle of Tours to stop the Muslim advance into Europe, but who will be our Charles Martel? Where is the unity and leadership? What is worse about this new Muslim conquest is that Europe invited the Trojan Horse of Islam into her lands. What a foolish and dangerous capitulation! 95% of the current conflicts in the world relate in some way to Islam. We cannot ignore the data. Islam is on the move and its sole aim is global domination and hegemony. The brutal attacks of the Jihadists are only one spear. Muslim immigration into Europe coupled with extremely high birth rates could spell the death of Christianity in Europe in just two or three generations! This is the fruit of liberal socialist policies, the historic Christian faith is subverted, the historic culture is replaced with new Islamic culture, the social milieu and language are replaced and you have a Europe broken and weak, unable to battle against the Islamic tidal wave overtaking it!

There are now 5,720,000 Muslims in France. This is a ticking time bomb! Within the next 100-150 years France could be a Muslim majority country.