This is a review of the book, “Killing the Deep State: The Fight to Save President Trump,” by Dr. Jerome Corsi. 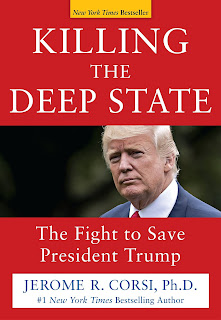 The leftist socialist/communist agenda to set up a one-world government which a handful of elites control
is absolutely real. Sadly half of our populace in America are socialists/communists who blindly support
the Deep State. These Democrats need to be dealt with definitively, they are the #1 threat to America’s
sovereignty and liberties.

It’s no surprise this Deep State is profoundly anti-Christian and anti-Jewish. It is however pro-Muslim.
A relative unknown like Obama  who was installed for 8 years as president is a testament to the power the
Deep State wields.

The Deep State now controls education (K-12 public schools and universities), the mainstream media, the
major tech companies (Google, Facebook, Microsoft etc), and as I said half the populace, who are dumb
sheep. Thanks to their stranglehold on education they have brainwashed and conditioned Democrats into
believing whatever false history and “facts” they feed them. They are not taught to think critically,
nor how to think, but rather they are taught what to think.

Democrats  have literally nothing to offer this nation except LGBT propaganda, destruction of religious
freedom, censorship, soaring deficits, imposition of an Islamic state ruled by sharia law, abortion on
demand (I guess 60 million babies murdered isn’t enough to satisfy the  left’s bloodlust), further
imposition and support for radical feminism, which has been destroying the family, high taxes, open
borders, amnesty cities and states for illegal immigration (many of whom commit heinous crimes) which
subverts the rule of law, betrayal of the state of Israel (our closest ally in the Middle East), high
crime rates and reduced or very light sentences, socialist healthcare which supports abortion on demand
and euthanasia, and a host of other maladies!  This is what Democrat voters are supporting whether they
realize it or not (dumb sheep).

President Trump has been undermined and attacked by Obama’s plants in the White House,
National Security Council, State Department, FBI, CIA, NSA, and the mainstream media. These Deep State
assets must be removed in President Trump’s second term. I commend Dr. Corsi for writing this important
book. It will no doubt enrage leftists suffering from Trump Derangement Syndrome. I welcome 4 more
years of the Trump administration and the dismantling of the Deep State! Democrats are hellbent on
destroying our Constitutional rights. Liberty must prevail!