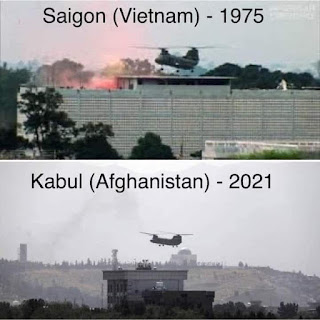 Kabul is lost and so is Afghanistan! It’s back into the hands of the Taliban – the Islamic fanatics who treat Christians and women as sub-human! 20 years of effort wiped out. Very tragic! Watching the desperation of the Americans and Afghanis trying to escape was reminiscent of the fall of Saigon. Like the Vietnam war, the Afghanistan war was a protracted police action without clear objectives to win the war. Afghanistan is very tribal, and I think it was too much to expect a national Afghan army to be cohesive and effective. In the end, they surrendered even with a 5:1 advantage over the Taliban. I think many Americans, like Americans during Vietnam, were questioning why we were even there in Afghanistan. And the historians will probably be wondering as well in coming years. I don’t believe this will be the end of American involvement in Afghanistan. They will resume harboring Islamic terrorist groups and could launch another 9/11 style attack on America, so we’ll likely return in some form if only airstrikes. For the more cynical I leave you with this chart on poppy (used to make opium and heroin) production in Afghanistan. 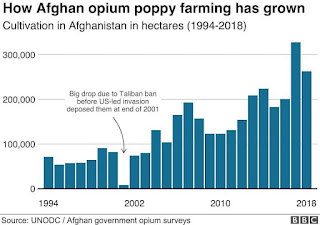 One response to “Taliban retake Afghanistan”