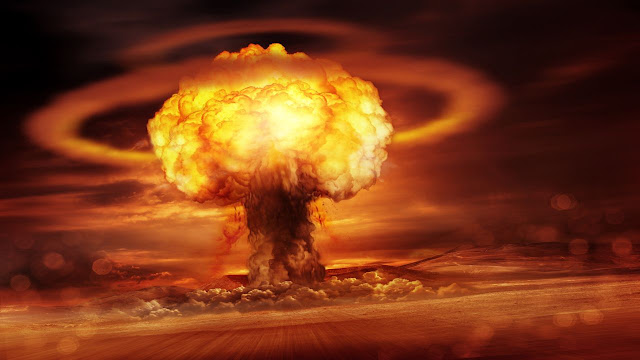 On July 16, 1945, at 5:29:45 AM (MST), the first atomic bomb ever detonated went off near Socorro, New Mexico at the test site known as Trinity. Hence the world was ushered into the Atomic Age. This place wasn’t far from Los Alamos, where the atomic bombs were under development in the top secret program known as the Manhattan Project. This eventually resulted in a Cold War arms race between the Soviet Union and the United States. 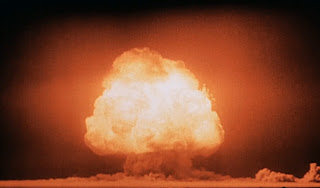 The Trinity test of the Manhattan Project was the first detonation of a nuclear weapon, which led J. Robert Oppenheimer to recall verses from the Hindu scripture Bhagavad Gita: “If the radiance of a thousand suns were to burst at once into the sky, that would be like the splendor of the mighty one “… “I am become Death, the destroyer of worlds”.
Shortly before the first detonation of a nuclear device, the Trinity test, July 16, 1945, Enrico Fermi jokingly took bets on “whether the atmosphere will be set on fire,” according to physicist Hans Bethe. Fermi was mocking concerns raised by Edward Teller that the fission explosion might trigger runaway fusion! Scientists get so caught up in their projects’ success, they don’t often fully think about the long term ramifications.

Why was the atomic bomb developed? Was it necessary to end the 2nd World War?

My parents recall the silly Duck and Cover drills they had at school in the early 50s. My father knew in 4th grade that the drills were useless and would not protect them if they were close to ground zero of a nuclear strike. Here is the video that was shown at the time to instruct kids what to do.

In the 1930s as the Nazi state rose, a large number of prominent physicists (some of Jewish ancestry), including Albert Einstein, left Germany and emigrated to the United States. Einstein’s breakthrough work on the relationship between matter and energy showed that a large amount of energy may be released from a relatively small amount of matter through the process of nuclear fission. Einstein himself went to far as to write to President Franklin D. Roosevelt and urge him to develop an atomic bomb before Germany did.

In the United States, in the summer of 1939, a small number of physicists, alarmed over the possibility of Germany successfully developing an atomic bomb, decided to warn President Roosevelt. A letter was written by Einstein and Szilard, and was delivered to the President’s aide, General Edwin Watson, by Alexander Sachs, an economist and writer who had a friendly relationship with Roosevelt. Sachs was given an appointment with the President to whom he read Einstein’s letter. The letter described the new powerful bombs that could be produced and recommended that the U.S. Government speed up experimental work currently taking place. Einstein closed his letter by stating his understanding that Germany had stopped the sale of uranium from Czechoslovakian mines and that Carl von Weizacker, a highly respected German scientist, was attached to the Kaiser Wilhelm Institute in Berlin where American work on uranium was being repeated. These last remarks reflected the concern of U.S. nuclear scientists over German capabilities. https://ehistory.osu.edu/articles/story-atomic-bomb 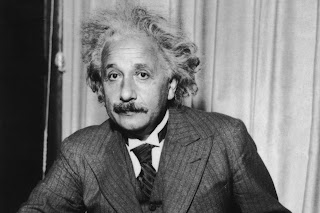 On August 6, 1945, the B-29 bomber Enola Gay carrying “Little Boy” dropped its bomb on Hiroshima, Japan, destroying most of the city and causing an estimated 140,000 deaths.

The fanatical Japanese Emperor Hirohito refused to surrender after Hiroshima. But once the news of Nagsaki reached him, he convinced the Japanese military they had to unconditionally surrender.

By the way, Nagasaki was home to  thousands of Japanese Catholics. Nagasaki was where famed Jesuit missionary Francis Xavier built a mission church nearly 400 years earlier. Christianity came to Nagasaki in 1543. The atomic bomb exploded directly over the Urakami Cathedral, killing 8,500 of its 12,000 members, either directly from the blast or later on through radiation sickness. In fact, Nagasaki was the most Christian city in Japan, and the massive cathedral had been the largest Christian church building in all of the Orient. 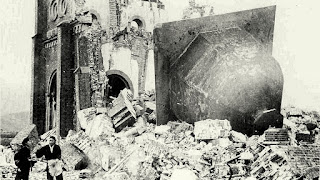 The ruins of the Urakami Cathedral in Nagasaki, Japan, as shown in a photograph dated Jan. 7, 1946.

The casualties from the 2 atomic bombs were terrible, but I feel the Allies, significantly the United States and President  Truman, made the right call by dropping the bombs. There was already a proposed plan underway to invade the Japanese home islands, called Operation Downfall. This would have resulted in at least 1 million Allied casualties, as well as 5 to 10 million Japanese casualties. Prior to the atomic bombs dropping on Hiroshima and Nagasaki, Japanese War Minister Anami said the military could commit 2,350,000 troops to continue fighting. In addition, commanders could call on 4 million civil servants for military duty! Without the 2 atomic bombs, the war would have dragged on until 1947 or even later possibly. A protracted, brutal land invasion of the Japanese home islands would have resulted in horrific casualties for both the Allied and the Japanese. The Japanese literally worshiped Emperor Hirohito as a god, and would have tenaciously fought to the last man as they did on Okinawa and other islands.

A few years after the atomic bomb was developed, the hydrogen bomb (thermonuclear) was developed by the United States. It used a combination of nuclear fission and fusion to produce far more energy. The  first atomic bomb released an amount of energy approximately equal to 20,000 tons of TNT or 84 terajoules. Whereas the first thermonuclear (“hydrogen”) bomb  released energy approximately equal to 10 million tons of TNT or 42 petajoules. One petajoule is 10^15 joules (1 million billion) or 278 gigawatt hours. This is equivalent to the electricity used by  2,354,000 televisions in a year!

The first thermonuclear bomb was developed by the United States under the code name Ivy Mike. It was detonated on November 1, 1952, on the island of Elugelab in Enewetak Atoll, in the now independent island nation of the Marshall Islands, as part of Operation Ivy. 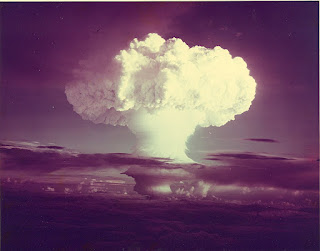 It’s scary living under the constant threat of nuclear annihilation. But, as a Christian, I have faith that God is sovereign and under full control of everything that will happen to me. And death is not the end, but only the beginning of an eternity with Him!

The Bulletin of Atomic Scientists keeps a doomsday clock of how close we are to doomsday. And it’s currently at 100 seconds to midnight. In other words, we are extremely close to a doomsday scenario involving the use of nuclear weapons.

Here are some photos of atomic and thermonuclear explosions.