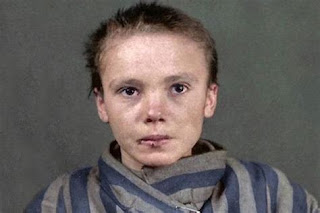 This is Czesława Kwoka taken at the Auschwitz concentration camp, just minutes before she was murdered by the Nazis.

Her crime was being Polish, Catholic, and 14 years old.  Her red triangle was for political prisoners, because of where she was born in Poland. After this photo was taken, she was killed in Auschwitz extermination camp on March 12, 1943 with a phenol injection in the heart.  Just before the execution, she was photographed by prisoner Wilhelm Brasse, who would later testify against the executioner of Czeslawa, a woman. Just before the photo was taken, the executioner punched Czeslawa in the face, as the hematoma on her lip shows. This is the face of a terrified little girl, who didn’t even speak the language of her executioner.   She had lost her mother a few days before.  But she dried her tears to look presentable for the photo.  They took her hair and her life, but they couldn’t take her dignity. She was only one of about 250,000 children and minors who were executed in Auschwitz-Birkenau. This is what happens when hatred is cultivated in a nation and thugs gain control.  If you don’t think could happen here, you need to read Gulag Archipelago.

According to this article,  between 1.1 and 1.6 million people died in Auschwitz. 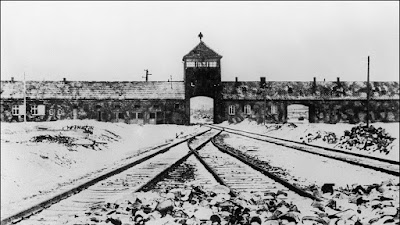 Here we see the train tracks heading towards Auschwitz. The Jews and others the Nazis wanted to kill were loaded on cattle cars and taken by train to Auschwitz.

I’m proud of my PapPap (paternal grandfather) for fighting the Nazis in Europe during World War 2! He helped put an end to the monstrous evil of Nazi Germany.

Never Forget! Sadly man’s heart is desperately wicked and utterly depraved. We have seen tens of millions of people die in genocide since World War 2 ended. We will continue to see such evil until Christ returns!

One response to “Auschwitz”