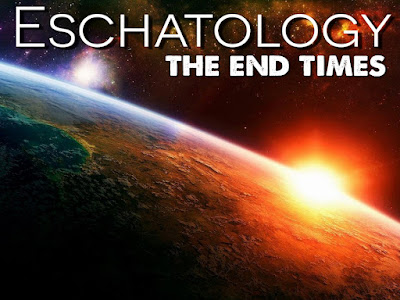 I love eschatology, the study of the End Times. I am a futurist. I believe most of the prophecies in Scripture concerning the End Times are future. I am a Premillennial, which means I believe Christ will return before the Millennium. Christ will rule the world under a theocracy headquarted in Jerusalem. I am also pre-tribulationial. I believe the Body of Christ will escape the Great Tribulation, this is a terrible time when God’s wrath shall come against the world like nothing ever before! His Bride shall  be raptured out of the world before the Tribulation begins.

Many believers don’t realize it, but Premillennialism was the majority view of the Early Church. There were some who believed in Amillennialism, that there isn’t a Millennium. But Amillennialism didn’t really become a dominant view in the Church until Augustine in the early 5th century when he wrote the book “The City of God”. The Roman Catholic church has been Amillennial ever since. The Protestant Reformers were used mightily by God, but sadly, they didn’t reform enough in all areas. One area was eschatology. So they retained the Roman Catholic view of Amillennialism. This is a great shame.

“The predominant eschatological view in the Ante-Nicene period was Premillennialism, the belief of a visible reign of Christ in glory on earth with the risen saints for a thousand years, before the general resurrection and judgment.”
Source: Schaff, Philip (1914) [1882]. History of the Christian Church. Vol. II: Ante-Nicene Christianity. Charles Scribner’s Sons. p. 614.

Here are some of the Church Fathers who were Premillennial:

Innocence (Eden); Adam under probation prior to the Fall. Ends with expulsion from the Garden of Eden. Some refer to this period as the Adamic period or the dispensation of the Adamic covenant or Adamic law.

Conscience (fall to flood); From the Fall to the Great Flood. Ends with the worldwide deluge.

Human Government (Noah to Babel); After the Great Flood, humanity is responsible to enact the death penalty. Ends with the dispersion at the Tower of Babel. Some use the term Noahide law in reference to this period of dispensation.

Promise (Abraham to Egypt); From Abraham to Moses. Ends with the refusal to enter Canaan and the 40 years of unbelief in the wilderness. Some use the terms Abrahamic law or Abrahamic covenant in reference to this period of dispensation.

Law (Moses to John the Baptist); From Moses to the crucifixion of Jesus Christ. Ends with the scattering of Israel in AD70. Some use the term Mosaic law in reference to this period of dispensation.

Grace (Church age); From the cross to the rapture of the church. The rapture is followed by the wrath of God constituting the Great Tribulation. Some use the term Age of Grace or the Church Age for this dispensation.

Kingdom (Millennium); A 1000 year reign of Christ on earth centered in Jerusalem, ending with God’s judgment on the final rebellion.

“There was a time when it was almost the case that the only people who believed in the Bible were the dispensationalists. That liberal theology can come into the mainline denominations… the evangelical church was really either nonexistent or almost exclusively dispensationalist. Then the language was either modernist or fundamentalist and the fundamentalists were utterly heroic.”
~ R.C. Sproul Jr.

Let us always be ready for the Lord’s return. Scripture says He will come like a thief in the night. We must  be prepared at all times for an imminent Rapture! This is our blessed hope. MARANATHA!