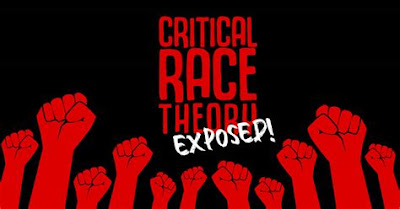 Critical Race Theory (CRT) originated in academia in the 1990s, yet it’s now embraced by the business world, by politicians, and it is even being taught in public schools and universities here in America.

CRT is an explicitly racist ideology. It teaches many untruths. Such as:

Can you name any public school that isn’t teaching CRT, intersectionality, that systemic racism is still endemic in the US, that police brutality against minorities is chronic and widespread, that white supremacy is the bedrock of the US constitution, history, and current status, and that there needs to be widespread reform to balance the scales? Move into higher education and the rhetoric becomes much more militant. Teachers were at the forefront of many BLM protests last year. Teachers are overwhelmingly left-wing from top to bottom in academia. This isn’t a new development.

Robin DiAngelo’s White Fragility is one long kafkatrap (def: A sophistical rhetorical device in which any denial by an accused person serves as evidence of guilt). Take a look at these resources about DiAngelo, white fragility, critical race theory, and Marxism (which is designed to lead to communism every single time). Here is an excellent article on the background of White Fragility as expressed by DiAngelo in her book.

Below is a list of 10 resources which thoroughly critique DiAngelo’s theories and the concepts that underpin them.

1. Exploring White Fragility: Debating the Effects of Whiteness Studies on America’s Schools, Rowman & Littlefield Publications, by Christopher Paslay. This book, which came out in April of 2021, uses both existing research and anecdotal classroom observations to examine the effects whiteness studies is having on America’s schools. (Click here to pre-order.)

2. The Flaws in White Fragility Theory: A Primer, New Discourses, by Helen Pluckrose and Jonathan Church. The title is self-explanatory: it’s a primer for understanding the major flaws in white fragility theory. Specifically, it analyses DiAngelo’s concept of “whiteness,” “white fragility,” and the shaky underlying concept of “implicit bias.” The article closes by illustrating how DiAngelo has constructed a house of cards full of logical fallacies.

3. White Fragility Theory Is a Bullying Rhetorical Tactic, The Agonist, by Jonathan Church. Robin DiAngelo believes that whites must shut up and listen. This article highlights how she uses white fragility theory to shut down whites — and any and all conversation — when they try to question or offer alternative viewpoints.

4. How ‘White Fragility’ Theory Turns Classrooms Into Race-Charged Power Struggles, The Federalist, by Jonathan Church and Christopher Paslay, (discussed further on the Dan Proft radio show). This article, co-authored by Jonathan Church and myself, highlights the flaws in methodology in white fragility, as well as how the approach can provoke resentment among classroom teachers.

5.  Psychology’s Favorite Tool for Measuring Racism Isn’t Up to the Job, The Cut, by Jesse Singal. This article exposes the fundamental flaws of the Implicit Association Test (IAT), and Harvard’s Project Implicit website, and how the IAT has both validity and reliability issues. Implicit bias, of course, is a concept that heavily underpins DiAngelo’s white fragility theory, as well as most approaches in the schools of whiteness studies and anti-racism.

6. Diversity Training Shouldn’t Be Based On Flawed Implicit Bias Research, Philadelphia Inquirer, by Christopher Paslay. This article highlights the problems with implicit bias research, and how mandatory implicit bias trainings can have unintended negative consequences on education and business, such as hurting teacher/manager morale and provoking resentment among faculty/colleagues.

7. The Theory of White Fragility: Scholarship or Proselytization? , Areo Magazine, by Jonathan Church. This article exposes the cult-like atmosphere surrounding DiAngelo and white fragility trainings, and how the workshops are based more in religious indoctrination than in education and rational inquiry.

9. Are Micro-Aggressions Really A Thing ?, The Good Men Project, by Jonathan Church. This article analyzes the scientific legitimacy of “microaggressions,” which like implicit bias, underpins much of whiteness studies, anti-racism, and white fragility theory.

10. Whiteness Studies and the Theory of White Fragility Are Based on a Logical Fallacy, Areo Magazine, (discussed further in an interview and podcast with Benjamin Boyce), by Jonathan Church. This articles exposes DiAngelo’s flawed reasoning and the logical fallacies at the heart of white fragility theory and whiteness studies in general.

Marxist scholars in the West simply adapted their revolutionary theory to the social and racial unrest of the 1960s. Abandoning Marx’s economic dialectic of capitalists and workers, they substituted race for class and sought to create a revolutionary coalition of the dispossessed based on racial and ethnic categories.

In contrast to equality, equity as defined and promoted by critical race theorists is little more than reformulated Marxism. In the name of equity, UCLA Law Professor and critical race theorist Cheryl Harris has proposed suspending private property rights, seizing land and wealth and redistributing them along racial lines. Critical race guru Ibram X. Kendi, who directs the Center for Antiracist Research at Boston University, has proposed the creation of a federal Department of Antiracism. This department would be independent of (i.e., unaccountable to) the elected branches of government, and would have the power to nullify, veto, or abolish any law at any level of government and curtail the speech of political leaders and others who are deemed insufficiently “antiracist.”

One practical result of the creation of such a department would be the overthrow of capitalism, since according to Kendi, “In order to truly be antiracist, you also have to truly be anti-capitalist.” In other words, identity is the means and Marxism is the end.

An equity-based form of government would mean the end not only of private property, but also of individual rights, equality under the law, federalism, and freedom of speech. These would be replaced by race-based redistribution of wealth, group-based rights, active discrimination, and omnipotent bureaucratic authority. Historically, the accusation of “anti-Americanism” has been overused. But in this case, it’s not a matter of interpretation—critical race theory prescribes a revolutionary program that would overturn the principles of the Declaration and destroy the remaining structure of the Constitution.

Although promoted as “anti-racist” civil rights education, CRT actively encourages discrimination. At its core, CRT segregates people into two main categories: oppressors or victims. The calculation is based solely on skin color. The tenets of CRT stretch far beyond the humanities. In some classrooms in Oregon and California, students operate under the understanding that “finding the right answer” in mathematics is racist. “Right” and “wrong” answers are deemed a product of white supremacy. The woke gymnastics required to reach such a conclusion would be amusing if this destructive ideology didn’t pose such a danger to education in America.

We must unite and fight against CRT! We must vote out politicians and judges who are pro-CRT. We must make sure we pass laws at the state level forbidding CRT in our K-12 classrooms. We must police university professors and what exactly they’re teaching related to CRT. We must boycott businesses which fund CRT and organizations which push CRT such as BLM (Black Lives Matter). We must have anti-CRT teachers and administrators in our schools and school boards. The time to fight back is now, before it’s too late for our children and grandchildren!