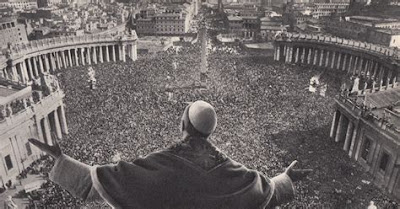 The Doctrine of Papal Infallibility teaches that the Pope, when he teaches on matters that concern faith or morals to the whole Church with the intent that the faithful follow the opinion, is teaching infallibly. One of the biggest practical problems with this doctrine is the issue of earlier Popes contradicting later Popes. Whenever this occurs, the Catholic apologist is forced to come up with all sorts of excuses as to how the earlier pope was not speaking Ex Cathedra.

Papal infallibility is a myth created by Rome!

Academic historians tend toward the view -echoed also by many Roman Catholic scholars that there is not so much as a trace of papal infallibility in the entire first millennium of Christianity.

Papal infallibility wasn’t an official doctrine until the First Vatican Council of 1870. Prior to that, the Roman Catholic church considered itself to be infallible in matters pertaining to doctrine, but it had not defined where the infallibility lay. Some believed it was vested in the Pope alone as the successor of Peter, and others in the Bishops in Council under the leadership of the Pope (the Magisterium). Subsequent to Vatican I, although the Magisterium acting in council was still considered infallible, the Pope now also had authority to proclaim infallible teachings of his own will, without the formal approval of the Bishops. Anathema was pronounced on all that would not submit to this decree. Although there were many Bishops at Vatican I who opposed the new doctrine, and who voted against, or abstained, most of them subsequently accepted it rather than be excommunicated. Their accomplished historian Döllinger refused to accept the dogma of papal infallibility, having found that the early church Fathers and Councils were utterly silent on the doctrine of infallibility.[1] His excommunication inevitably followed and, despite many subsequent attempts to persuade him, he refused to recant.

Dominican Cardinal Yyves Congar said there was not even a *germ* of what developed into papal infallibility until the 1200s. The notion seems to have originated first on the lips of “dissident Franciscans” (cf. Tierney, Origins of Papal Infallibility, cited below)

Fr. Hans Kung observes: “”[before the Orthodox/Latin Schism]The Eastern patriarchs and metropolitans certainly still regarded the pope as bishop of the old imperial capital and sole patriarch of the West. But as such he was first among equals. And this was not, say because of a special biblical promise or a legal authority. Of course, no one at that time, even in Rome would have thought that the bishops of Rome were infallible…
“Historical research, notably that of Yves Congar, has shown that down to the twelfth century, outside Rome, the significance of the Roman church was not understood as a real teaching authority in the legal sense (magisterium)… No one in the whole of the first millennium regarded decisions of the pope as infallible.
‘But historical research has also shown that the popes, particularly from the fifth century on, decisively extended their power with explicit forgeries. The freely invented legend of the holy Pope Silvester comes from the fifth/sixth centuries. In the eighth century it led to a highly influential forgery, the Donation of Constantine (shown to be a forgery in the fifteenth century), according to which Constantine left Rome and the Western half of the empire to Pope Silvester, allowed him the imperial insignia and garments (purple) and a court to match; and bestowed on him the primacy over all other churches, especially Antioch, Alexandria, Constantinople, and Jerusalem. In fact Constantine had left him only the Lateran palace and the new basilicas of the Lateran and St. Peter’s” Fr. Hans Kung, The Catholic Church: A Short History (2001), pp. 60-61.

Brian Tierney, Origins of Papal Infallibility, 1150-1350: A Study on the Concepts of Infallibility, Sovereignty and Tradition in the Middle Ages, affirms
“There is no convincing evidence that papal infallibility formed any part of the theological or canonical tradition of the church before the thirteenth century; the doctrine was invented in the first place by a few dissident Franciscans because it suited their convenience to invent it; eventually, but only after much initial reluctance, it was accepted by the papacy because it suited the convenience of the popes to accept it” (p. 281).
cf. also Bernhard Hasler, (Roman Catholic priest) How the Pope Became Infallible: Pius IX and the Politics of Persuasion( (1981).

Vatican I had said it was a part of the faith of the Latin church from the beginning. The adamant denial that this is so by academic historians including Roman Catholic academics is sometimes explained theologically with reference to the paradigm of development defended by Cardinal John Henry Newman (cf. Hegelian dialectic) which became a prominent factor in Vatican II according to Pope John Paul who called it “Newman’s Council.” Arguments to the contrary notwithstanding it seems reasonable to suggest if there is no trace of papal infallibility for the first thousand years of the Church as many scholars argue.

Catholic theologians agree that both Pope Pius IX‘s 1854 definition of the dogma of the Immaculate Conception of Mary and Pope Pius XII‘s 1950 definition of the dogma of the Assumption of Mary are instances of papal infallibility. Both followed wide consultation with the bishops, as to whether these doctrines were already believed worldwide.[12] However, theologians disagree about what other documents qualify.

Regarding historical papal documents, Catholic theologian and church historian Klaus Schatz made a thorough study, published in 1985, that identified the following list of ex cathedra documents:[68]

So Rome can’t even agree on what pronouncements were infallible. It’s interesting to note that the last 2 infallible doctrine made by popes, the Immaculate Conception and the Assumption of Mary, are wholly lacking in Scriptural support. The Immaculate Conception was unheard of until the 4th century. And many in the Roman Catholic church opposed it such as learned Doctor of the Roman Catholic church and theologian Thomas Aquinas. We know from Scripture that all have sinned, except Christ. We inherit the original sin of Adam. The doctrine of the Immaculate Conception of Mary rests on a biased and fatuous translation of Luke 1:28 (the “full of grace” passage) that the original Greek doesn’t support! Scripture is crystal clear that all of us are sinners. That includes Mary. It is an assault on the unique nature of Christ to assert that someone else was also without any sin. Those who believe Mary was conceived without sin use tortured logic. They say that a sinless Christ could only come from a sinless Mary. Yet they concede the point that a sinless Mary came from sinful parents.

One response to “Papal Infallibility”