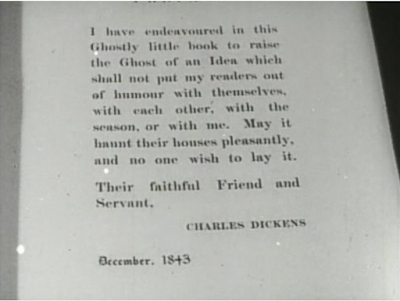 Here we see the opening credits at the commencement of the story in the book: “I have endeavoured in this Ghostly little book to raise the Ghost of an Idea which shall not put my readers out of humour with themselves, and each other, with the season, or with me. May it haunt their houses pleasantly, and no one wish to lay it.” Their faithful Friend and Servant, CHARLES DICKENS December, 1843

I first saw this film when I was 5 years old. It is one of the earliest Christmas movies I remember. Also, it holds the distinction of being the first British film I had ever seen. In this adaptation of Charles Dickens wonderful novel, “A Christmas Carol”, we are introduced to the foul tempered, irascible old curmudgeon Ebeneezer Scrooge, played impressively by Sir Seymour Hicks, who sees nothing merry in Christmas. Rather he dismisses it with, “Bah humbug!” Scrooge and his former partner,  Jacob Marley, who died 9 years ago at the time of the story, established a money lending firm. They valued profits above people. The pound sterling was their idol. Scrooge’s employee, Bob Cratchit, played brilliantly by Donald Calthrop, who is over worked, underpaid, does his best to not let Scrooge ruin his Christmas cheer. Produced by Julius Hagen and directed by Henry Edwards.

The film opens with Scrooge and Bob busy writing down figures on Christmas Eve night in the year 1843. The location is London, England. We see Bob trying to warm his freezing hands by a candle’s flame. Not only is Scrooge miserly in his business dealings, but also with his coal. He objects to poor Bob adding a few lumps of coal to the furnace in the frigid office and admonishes him for doing so. 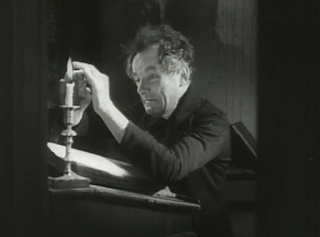 Scrooge complains that he has to begrudgingly pay Bob for the Christmas day holiday; he reminds Bob that he’s being paid for not working. Scrooge’s nephew, Fred, drops by and invites his uncle Scrooge to a holiday party on Christmas day. Scrooge rebuffs him rudely. When Bob voices support for Fred’s holiday spirit of good cheer, Scrooge warns him he could soon find himself without a job. 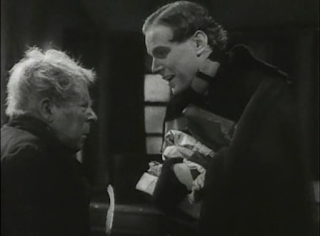 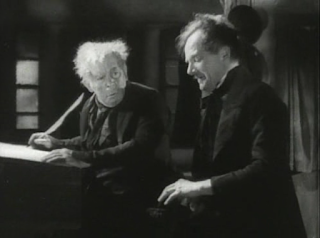 It’s 7pm so Bob leaves and wishes Scrooge a merry Christmas. Scrooge angrily dismisses him with a scornful, “Bah humbug!” Scrooge has dinner and then returns home. He sees the disembodied face of Jacob Marley, his old partner, hovering ominously above the door knocker. 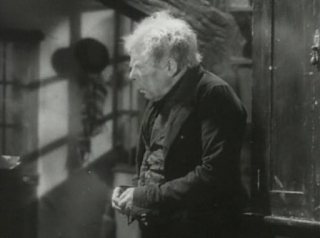 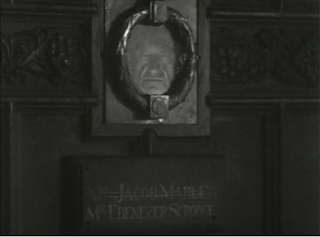 Marley’s ghost appears inside Scrooge’s home and tells him that he will be visited by 3 spirits tonight. The spirits are of Christmas Past, Present, and Future. He laments that he should have made humanity and love his business while he was still alive. He carriers around a heavy chain with many links for all of his sins. Marley informs Scrooge that his chain is even longer. Marley roams the earth without any peace. 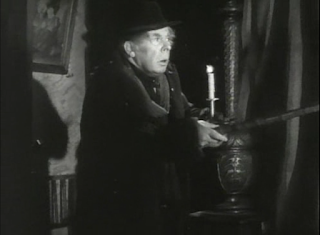 Scrooge goes to sleep, and soon the spirit of Christmas Past awakens him. He takes Scrooge to a scene from his youth, when he was a young man. A desperate husband and wife plead with Scrooge to give them more time to repay him, even just a week. Scrooge refuses and says he will take possession of their house. They leave, but Scrooge’s fiancee had come in earlier and overheard the whole dreadful conversation. She tells Scrooge that she tried to not believe the awful things she’d been hearing from her social circle about Scrooge being consumed with the love of money and not having human warmth and charity. She breaks off their engagement by giving Scrooge back her engagement ring. Scrooge is devastated to see this, and he tells the spirit he can’t bear it anymore. He lost the love of his life because of greed and the love of money. Scrooge finds himself once again back in his bed and returns to sleep. 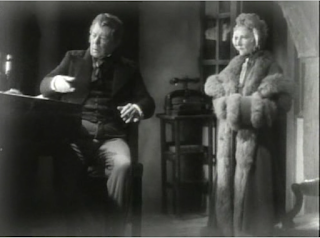 Scrooge is once again woken up by the spirit of Christmas Present. He is a large and jolly fellow. He shows him Bob and his crippled youngest son Tiny Tim. They emerge from church with Tim on Bob’s back as he happily takes him home. It’s evident the deep love Bob has for his son. 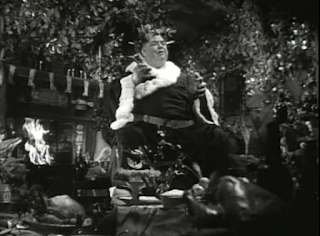 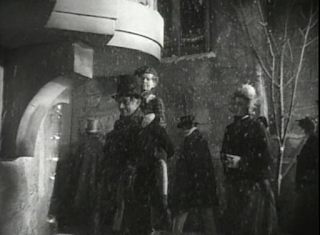 The Cratchit family eat their meager Christmas goose, yet they are overjoyed to be spending the time together as a family. Next comes the flaming Christmas pudding. Finally Bob asks that they all raise their glasses in a toast to the health of their benefactor Scrooge. His wife objects, but she acquiesces eventually. Scrooge asks what will become of Tiny Tim, and the spirit tells him he sees an empty chair and a crutch without a owner. Scrooge appears devastated to learn this. 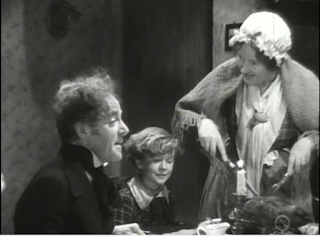 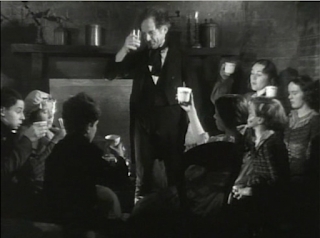 Next Scrooge is once more back in his bed and soon the final Christmas spirit appears, the spirit of the Future. He takes him back to Bob’s home. Only now everyone looks sullen and the mood is very somber. We learn that Tiny Tim has died. Bob kisses Tiny Tim’s lifeless body one last time. At the exchange businessmen talk about an associate who has just died. And they say that no one will miss him. We then see 2 charwomen selling their bundles at a pawn broker. The one charwoman says how she took the fine shirt off the rich dead man’s body and took down his bedcurtains. They laugh and joke about the dead man not needing the stuff anymore. Scrooge asks the spirit who this man is? Next Scrooge is taken to the cemetery. He sees a grave with his name on it. He begs the spirit that these things which he’s seen will not come to pass. He says he will live righteously and keep Christmas every year if he is given another chance. 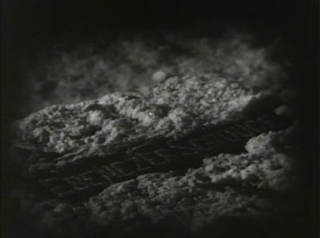 Scrooge is once more back in bed. It’s Christmas morning and, to his own astonishment, he’s alive. Scrooge prays and thanks his old partner Marley for the night’s experiences. He says he’s a changed man and promises to be a new creation. This echos the theme of the movie, which is personal redemption. Scrooge rejoices and giddily dances. You can see the unbridled exuberance in his facial expressions. The servant  brings in his breakfast, and she’s astonished to see the change in Scrooge. Scrooge opens the bedroom window and asks a boy if the prized goose is still for sale. The boy says yes, and Scrooge tells him to go get it and he’ll reward him. Eventually the merchant and the boy arrive with the massive goose, and Scrooge instructs the boy to deliver it to Bob’s home, but not to say who it’s from. 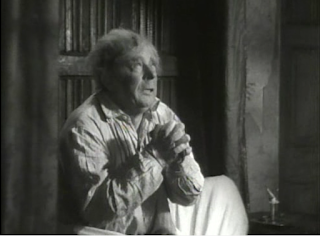 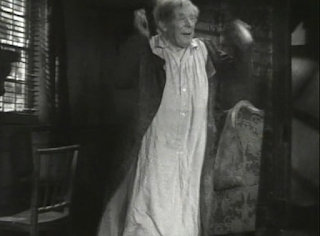 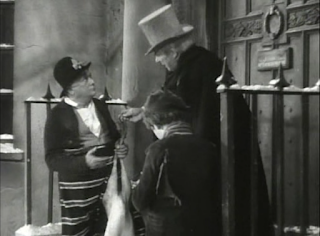 Next we see Scrooge arrive at his nephew Fred’s home. They are having a Christmas party and are about to dine. When Scrooge enters their drawing room they are shocked and astonished to see him. Scrooge sheds tears at their Christmas tree when he hear the Christmas carol Hark! The Herald Angels Sing. Scrooge is welcomed and he dines with them. Scrooge then returns to his office in town. Bob is running a bit late and sheepishly enters the office and goes to take his seat at his desk, when Scrooge, pretending to be upset, yells at him. Scrooge then informs Bob that he’s giving him a raise and that he intends to be a second father figure to Tiny Tim! Scrooge warmly embraces Bob and caresses his cheek with his hand. 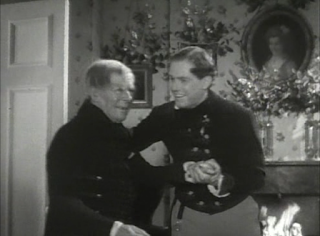 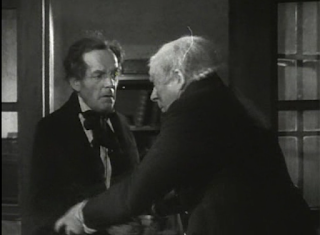 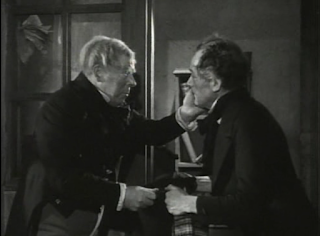 Next, we see Scrooge enter a church. The congregation is singing Hark! The Herald Angels Sing. Scrooge looks a bit ashamed and downcast when he first steps into the church. But he then grabs a hymnal and sees Bob so he sits next to him. Scrooge warmly touches Bob’s hand, and they begin singing together. Scrooge’s spiritual transformation is now complete. This film clearly and effectively, in my view, presented the Gospel of Christ. It showed how utterly depraved and lost in sin Scrooge was. The 3 Christmas spirits were akin to the Holy Spirit quickening Scrooge’s heart. We see his psychological and spiritual journey reflected in the scenes of the film. Scrooge repents and believes the Gospel. The old Scrooge mired hopelessly in darkness was gone, and we see the new man in Christ. A new creation! I didn’t realize it as a child, but this movie beautifully articulated the Gospel and brilliantly portrayed the true peace and joy which can only come from faith in Christ. 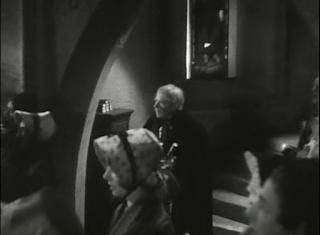 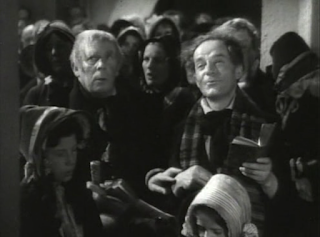 I’ve watched many film adaptations of Dicken’s book, but I think Sir Seymour Hicks gave my favorite performance. Henry Edwards did a masterful  job of directing, the pacing, attention to detail, I felt like I was in the bleak Victorian London, and the actors responded well to his direction. This copy I watched had some film artifacts and scratches and over exposures, but they weren’t bad enough to severely impair my enjoyment of viewing the film.

By the way, Sir Seymour Hicks first played Scrooge onstage in 1901 and it became his most popular role. Throughout his career he played it over a thousand times, often at fund-raising benefits.  Hicks also played Scrooge in film for the first time in Old Scrooge a silent film short from 1913. I’d say my overall favorite retelling of this story is A Christmas Carol (1951)  with Alastair Sim as Scrooge. This film which I’ve just reviewed with Hicks as Scrooge is  my second favorite adaptation. But, Hicks delivers the best performance as Scrooge in my view.

Be sure to get a copy of this film that has the original running time of 78 minutes. Some releases are only 60 minutes. I also recommend the black and white version, not the recent colorized one.