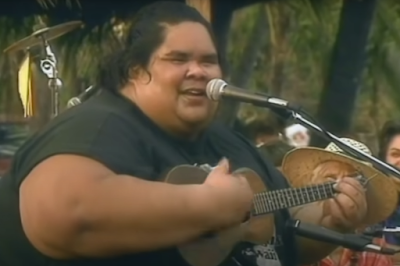 This song is so beautiful!!! I was crying like a baby! Towards the end of the video, we see Israel’s ashes released into the ocean in his beloved Hawaii! Amazing. He was a born-again Christian so I look forward to seeing him in Heaven someday!

Please pray for his family mourning his loss, including his wife Marlene Ku`upua Ah Lo, who was his childhood sweetheart, and their daughter, Ceslianne Wehekealake`alekupuna Ah Lo.

By the way, in 1988, Israel Kamakawiwo’ole called the sound studio at 3am, and asked if he could come record, because he had an idea. He was so polite the studio owner said yes even though it was too late. 15 minutes later he showed up, sang and played his ukulele and recorded “Over The Rainbow” in just one take, with no editing or manipulation! That is the song you hear here!

Something about this song is just magical. It’s such a hopeful song, and the warm timber of Israel’s voice matches the song perfectly! And I love the simple melody played out by the ukulele! He sings with such feeling. Truly Iz, as he was known to his friends, family, and fans, was a master musician.

Here is a wonderful documentary on Iz’s life and music.

I did some research and found out that Israel dedicated his life to Christ and was baptized only 1 year before  his passing!! Praise the Lord for His perfect timing and provision!!!

The Rev. Ethel Amina of Waianae Pentecostal Faith Church and her family were among dozens of relatives of Kamakawiwo’ole at the event. Amina and her daughter, Joy Kaio, said they were joyful because Israel chose to be baptized a Christian a year ago. “The last time I saw him, he told me: ‘When I get out (of the hospital), I want to walk into my grandpa’s church again.’

This gentle giant is now worshiping the Lord in His presence! He died on June 26th, 1997 at the age of 38 from respiratory complications as a result of obesity. Israel weighed 700 pounds at the time of his death.  His YouTube video of “Over The Rainbow” has over 1 billion views! Please enjoy!