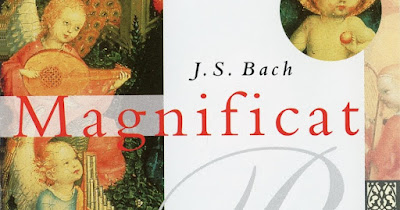 Note: This work is not to be confused with Bach’s Magnificat in D Major (BWV 243) which is a revision of BWV 243a.

This is my favorite performance of this piece! It features a stunning array of Baroque soloists such as David Thomas (bass), Paul Elliott (tenor), and the amazing and incomparable virtuoso soprano Dame Emma Kirkby when her voice was in its prime! The flashy, kaleidoscopic Magnificat remains one of Bach’s most popular works. Simon Preston directs a performance full of energy and features a crisp and brilliant interpretation, using period instruments, and an all boys choir just as Bach would have used. This is a wonderful example of the very best of historically informed performance (HIP) practice. The crackerjack choir and orchestra sail through the trickiest passages at high speed without sounding at all rushed or uncomfortable. The Choir of Christ Church Cathedral Oxford is just superb, fresh voices with the proper amount of balance and complete technical assurance; their performance make this difficult peace sound very easy.

The Magnificat in E-flat major, BWV 243a, also BWV 243.1, by Johann Sebastian Bach is a musical setting of the Latin text of the Magnificat, Mary‘s canticle from the Gospel of Luke. It was composed in 1723 and is in twelve movements, scored for five vocal parts (two sopranos, alto, tenor and bass) and a Baroque orchestra of trumpets, timpani, oboes, strings and basso continuo including bassoon. Bach revised the work some ten years later, transposing it from E-flat major to D major, and creating the version mostly performed today, BWV 243.

The work was first performed in Leipzig in 1723. In May that year Bach assumed his position as Thomaskantor and embarked on an ambitious series of compositions. The Magnificat was sung at vesper services on feast days, and, as suggested by recent research, Bach’s setting may have been written for a performance on 2 July, celebrating the Marian feast of the Visitation. For a Christmas celebration the same or a later year, he performed it at the Nikolaikirche with the insertion of four seasonal movements.

As a regular part of vespers, the canticle Magnificat was often set to music for liturgical use. Bach, as some of his contemporaries, devotes individual expression to every verse of the canticle, one even split in two for a dramatic effect. In a carefully designed structure, four choral movements are evenly distributed (1, 4, 7, 11). They frame sets of two or three movements sung by one to three voices, with individual instrumental colour. The work is concluded by a choral doxology (12), which ends in a recapitulation of the beginning on the text “as it was in the beginning”. In Bach’s Leipzig period, Magnificat is the first major work on a Latin text and for five vocal parts. – Wikipedia