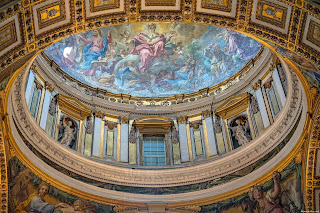 The papal line of succession is riddled with political appointees, Borgias, adulterers, murderers, and power-hungry wretches who cared far more for themselves than for Christ or His flock the church. For decades there were 2 popes at the same time, and for a while even 3 popes. All of them frantically excommunicating each other and sending thousands of men to die in battle to further their own cause. Any talk of “Apostolic Succession” giving the Roman Catholic church an elevated status, much less the “One and only true Church” is rot and bunk of the highest order.. Here is a list of popes and some of their sins for you:

Pope Pius II (1458–1464) He had at least two illegitimate children, one in Strasbourg and one in Scotland, both born before he entered the clergy. Delayed becoming a cleric because of the requirement of chastity.

Pope Innocent VIII (1484–1492) He had two illegitimate children during his youth, both born before he entered the clergy. Nepotism described as “lavish as it was shameless.” Married elder son Franceschetto Cybo to the daughter of Lorenzo de’ Medici, who in return obtained the cardinal’s hat for his 13-year-old son Giovanni, who became Pope Leo X.

Pope Clement VII (1523–1534) He had a relationship with a Nubian slave girl – possibly Simonetta da Collevecchio He had ad one illegitimate son before he took holy orders, identified as Alessandro de’ Medici, Duke of Florence.

Known to, or suspected of having fathered illegitimate children after receiving Holy Orders:

Pope Julius II (1503–1513) He had three illegitimate daughters, one of whom was Felice della Rovere (born in 1483, twenty years before his election as pope, but twelve years after his enthronement as Bishop of Lausanne). The schismatic Conciliabulum of Pisa, which sought to depose him in 1511, also accused him of being a “sodomite”.

Pope Paul III (1534–1549) He had Silvia Ruffini as mistress Yes held off ordination in order to continue a promiscuous lifestyle, fathering four illegitimate children (three sons and one daughter) by Silvia Ruffini after his appointment as Cardinal-Deacon of Santi Cosimo and Damiano. He broke his relations with her ca. 1513. He made his illegitimate son Pier Luigi Farnese the first Duke of Parma.

Pope Gregory XIII (1572–1585) He had an affair with Maddalena Fulchini Yes received the ecclesiastical tonsure in Bologna in June 1539, but subsequently had an affair which resulted in the birth of Giacomo Boncompagni in 1548. Giacomo remained illegitimate but Gregory later appointed him Gonfalonier of the Church, governor of the Castel Sant’Angelo, as well as governor of Fermo.

Pope Leo XII (1823–1829) He was allegedly, as a young prelate, suspected of having had a liaison with the wife of a soldier of Swiss Guard and as nuncio in Germany allegedly fathered three illegitimate children.

Popes alleged to be sexually active during pontificate:

Pope Sergius III (904–911) He was accused by opponents of being the illegitimate father of Pope John XI by Marozia. Such accusations found in Liutprand of Cremona’s Antapodosis, as well as the Liber Pontificalis. The accusations are disputed by another early source, the annalist Flodoard (c. 894–966): John XI was brother of Alberic II, the latter being the offspring of Marozia and her husband Alberic I, so John too may have been the son of Marozia and Alberic I. Fauvarque emphasizes that contemporary sources are dubious, Liutprand being “prone to exaggeration” while other mentions of this fatherhood appear in satires written by supporters of Pope Formosus.

Pope John X (914–928) He had romantic affairs with both Theodora and her daughter Marozia, according to Liutprand of Cremona in his Antapodosis.

Pope John XII (955–963) He was accused by adversaries of adultery and incest. Benedict of Soracte noted that he had “a collection of women”. According to Liutprand of Cremona, “they testified about his adultery, which they did not see with their own eyes, but nonetheless knew with certainty: he had fornicated with the widow of Rainier, with Stephana his father’s concubine, with the widow Anna, and with his own niece, and he made the sacred palace into a whorehouse.” According to Chamberlin, John was “a Christian Caligula whose crimes were rendered particularly horrific by the office he held”. Some sources report that he died 8 days after being stricken by paralysis while in the act of adultery, others that he was killed by the jealous husband while in the act of committing adultery.

Pope Paul II (1464–1471) He was thought to have died of indigestion arising from eating melon, though detractors insisted that he died while engaging in sodomy with a page.

Pope Sixtus IV (1471–1484) Sixtus was a “lover of boys and sodomites” – awarding benefices and bishoprics in return for sexual favours, and nominating a number of young men as cardinals, some of whom were celebrated for their good looks. However, Infessura had partisan allegiances to the Colonna family and so is not considered to be always reliable or impartial.

Pope Alexander VI (1492–1503) He had a long affair with Vannozza dei Cattanei while still a priest, but before he became pope; and by her had his illegitimate children Cesare Borgia, Giovanni Borgia, Gioffre Borgia, and Lucrezia. A later mistress, Giulia Farnese, was the sister of Alessandro Farnese, and she gave birth to a daughter (Laura) while Alexander was in his 60s and reigning as pope. Alexander fathered at least seven, and possibly as many as ten illegitimate children, and did much to promote his family’s interests – using his offspring to build alliances with a number of important dynasties. He appointed Giovanni Borgia as Captain General of the Church, and made Cesare a Cardinal of the Church – also creating independent duchies for each of them out of papal lands.

Pope Leo X (1513–1521) He was accused, after his death, of homosexuality (by Francesco Guicciardini and Paolo Giovio). It has been suggested he may have had ulterior motives in offering preferment to Marcantonio Flaminio.

Pope Julius III (1550–1555) He was alleged to have had a long love affair with Innocenzo Ciocchi del Monte which was a cause of public scandal. The Venetian ambassador at that time reported that Innocenzo shared the pope’s bed.

The Inquisitions Pope Innocent IV’s papal bull Ad extirpanda of 1252, which explicitly authorized (and defined the appropriate circumstances for) the use of torture by the Inquisition for eliciting confessions from heretics. By 1256 inquisitors were given absolution if they used instruments of torture.Thousand of people were tortured to murdered in horrendously gruesome ways by the Roman Catholic church in Europe. Asia, and the Americas. With full support and blessing from the popes of the day. To claim that this line of wretched, evil, and often politically appointed men somehow makes the Roman Catholic church better than any other Church is a terrible error.

As we can see, the notion of apostolic succession in the Roman Catholic church is a joke. What  matters is fidelity to sound doctrine, not apostolic succession. These wicked popes were treated with much respect and reverence. And according to Roman Catholic theology, they were the  very Vicar of Christ, Christ’s one and only representative on earth! Can you imagine these wicked men representing Christ? It makes me nauseous!