The Immaculate Conception of Mary Debunked 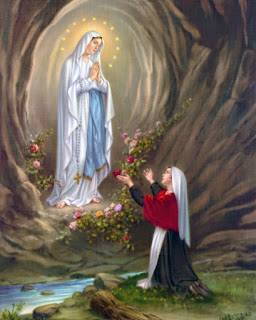 Bernadette Soubirous, a young teenager in France in the 19th century, reportedly experienced 18 visions of the Blessed Mother Mary. She appeared to Bernadette in a grotto near Lourdes. In one of these visions she exclaimed, “I AM THE IMMACULATE CONCEPTION!”

The Marian Apparitions at Lourdes were reported in 1858 by Bernadette Soubirous, a 14-year-old miller’s daughter from the town of Lourdes in southern France.

From 11 February to 16 July 1858, she reported 18 apparitions of “a Lady”. Soubirous described the lady as wearing a white veil and a blue girdle; she had a golden rose on each foot and held a rosary of pearls. After initial skepticism from the Clergy, these claims were eventually declared to be worthy of belief after a canonical investigation, and the apparition is known as Our Lady of Lourdes.

According to Soubirous, her visions occurred at the grotto of Massabielle, just outside Lourdes. On 16 July 1858, Soubirous visited the grotto for the last time and said: “I have never seen her so beautiful before.” On 18 January 1862, the local bishop declared: “The Virgin Mary did appear indeed to Bernadette Soubirous.” In 1958, Pope Pius XII issued the encyclical Le pèlerinage de Lourdes (“The pilgrimage to Lourdes”) on the 100th anniversary of the apparitions. Pope John Paul II visited Lourdes three times; Pope Benedict XVI visited Lourdes on 15 September 2008 to commemorate the 150th anniversary of the apparitions.

Soubirous was canonized a saint in 1933 by Pope Pius XI.

During  the 16th appearance of Mary on March 25th she exclaimed: “I AM THE IMMACULATE CONCEPTION!”

The Immaculate Conception is a doctrine of the Roman Catholic church that states that the Virgin Mary was free of original sin from the moment of her conception.

First debated by medieval theologians, it proved so controversial that it did not become part of official Catholic teaching until 1854, when Pius IX gave it the status of dogma in the papal bull Ineffabilis Deus.

On December 8, 1854, Pope Pius IX made the infallible proclamation:

We declare, pronounce, and define that the doctrine which holds that the most Blessed Virgin Mary, in the first instance of her conception, by a singular grace and privilege granted by Almighty God, in view of the merits of Jesus Christ, the Savior of the human race, was preserved free from all stain of original sin, is a doctrine revealed by God and therefore to be believed firmly and constantly by all the faithful.

Some of the Catholic church’s most esteemed and learned Doctors such as Thomas Aquinas and Bernard of Clairvaux did not believe in the doctrine of the immaculate conception of Mary. Aquinas was the leading saint in the Catholic church in medieval times. The Franciscans and Dominicans of the 13th century were against the Immaculate Conception as well.

If we look to Scripture we see no support at all for this novel doctrine. With this papal pronouncement ex cathedra Pope Pius made it such that the Catholic faithful must believe in this dogma or else they would be cut off from salvation! This is terrible. As a Protestant I reject the notion of an  infallible teaching authority (Magisterium). If a Christian doctrine cannot be clearly substantiated by Scripture it is without merit.

I hear Catholic apologists assert that Jesus could only be conceived without sin in a woman that was sinless herself. This is wrong biblically as well as illogical. According to Catholic beliefs the sinful parents of Mary were able to conceive an immaculate child Mary! Yet they say Jesus could not also  have been conceived by a sinful Mary! It is inconsistent and self-contradictory. So this assertion by Catholics that if Mary were sinful Jesus would have inherited a sinful nature is nonsense.

I’ve also heard Catholic apologists assert that Luke 1:28, when the angel Gabriel  said to Mary, “Hail, full of grace, the Lord is with you.” that  this means Mary was without sin! This is utter eisegesis! Reading the belief you want into the text. A more accurate translation is that Mary is highly favored. God gave her the grace she needed to bear the Messiah. It doesn’t mean that Mary was sinless.

Another thing I hear Catholic apologists assert is that they say how could this uneducated girl who was just 14 know about the dogma of the Immaculate Conception of Mary which was promulgated only 4 years earlier? It’s obvious to me that 4 years is plenty of time for such a  major dogma to spread to the Catholic faithful. Even if a relative of Bernadette didn’t know of the dogma I’m sure her priest did and he told her what to say!

Here is a movie about these events at Lourdes:

I took a poll in one of my Facebook groups which has a lot of Catholics and the majority believed it would make a huge difference in their salvation if Mary were a sinner and not immaculately conceived! This result makes me very sad. They don’t understand the nature of salvation which is by grace alone, through faith alone in Christ alone! Mary’s only role in our salvation was a secondary one as the mother of Jesus. She plays no further part in our salvation. 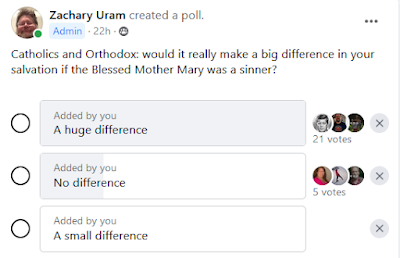 The doctrine of the immaculate conception of Mary is unheard of until the mid 3rd century. It should also be noted that more than a few Church Fathers opposed this doctrine:

1. Origen, commenting on Luke 2:35, and specifically Simeon’s statement that a sword will pierce Mary’s heart:

“What ought we to think? That while the apostles were scandalized, the Mother of the Lord was immune from scandal? If she had experienced scandal during the Lord’s Passion, Jesus did not die for her sins. But if all have sinned and fall short of the glory of God, but are justified by his grace and redeemed,” then Mary too was scandalized by this moment. This is what Simeon is prophesying about…. Your soul will be pierced by the sword of unbelief and will be wounded by the sword point of doubt” (Homilies on Luke, 17.6-7).

2. Tertullian references certain flaws of Mary in his discussion of the unbelief of Jesus’ family (“not even his brothers believed in him” [John 7:5]) and Jesus’ question in Matthew 12:48: “What are mother and brothers to me?” He affirms, over and against Apelles and Marcion, Jesus’ genuine nativity, but has no hesitation in including Mary along with his brothers as unbelieving and the object of his rebukes: “when denying one’s parents in indignation, one does not deny their existence, but censures their faults.” Evidently Tertullian is not aware that this is a controversial opinion. He even goes so far as to see Mary as a symbol of the unbelieving synagogue that rejected Christ: “in the abjured mother there is a figure of the synagogue, as well as of the Jews in the unbelieving brethren” (On the Flesh of Christ, chapter 7.)

3. Like Origen, Basil interpreted the sword of Luke 2:35 as the sword of doubt, linking Mary with the disciples in receiving healing and confirmation in faith after Jesus’ resurrection:

“Simeon therefore prophesies about Mary herself, that when standing by the cross, and beholding what is being done, and hearing the voices, after the witness of Gabriel, after her secret knowledge of the divine conception, after the great exhibition of miracles, she shall feel about her soul a mighty tempest. The Lord was bound to taste of death for every man—to become a propitiation for the world and to justify all men by His own blood. Even you yourself, who hast been taught from on high the things concerning the Lord, shall be reached by some doubt. This is the sword. “That the thoughts of many hearts may be revealed.” He indicates that after the offense at the Cross of Christ a certain swift healing shall come from the Lord to the disciples and to Mary herself, confirming their heart in faith in Him. In the same way we saw Peter, after he had been offended, holding more firmly to his faith in Christ” (Basil, Letter 260.9).

The earlier context makes it clear that this is not a blameless doubt, for Basil is linking Mary with the other disciples in their “rising and falling” in doubt at the offense of the cross, which Basil interprets as the “sign” of which Simeon speaks (see Letter 260.6-9).

4. There are numerous passages in John Chrysostom where he indicates a moral fault in Mary. His comments on Mary’s vainglory in John 2, and Jesus’ rebuke to her, are well-known. Also relevant is his comment on Matthew 12:46-49, where John portrays Mary with a vainglorious desire to have power over her son:

“And this He said, not as being ashamed of His mother, nor denying her that bare Him; for if He had been ashamed of her, He would not have passed through that womb; but as declaring that she has no advantage from this, unless she do all that is required to be done. For in fact that which she had essayed to do, was of superfluous vanity; in that she wanted to show the people that she has power and authority over her Son, imagining not as yet anything great concerning Him; whence also her unseasonable approach” (Homilies in Matthew, Homily 44.3).

John proceeds to compare this occasion to Jesus’ rebuke of Mary in John 2, describing the effect of Jesus’ words to his mother as intended to “heal her vainglory.”

5. Hilary of Poitiers, once again on Luke 2:35, interprets Simeon’s words as a judgment upon Mary: “if this virgin, made capable of conceiving God, will encounter the severity of this judgment, who will dare to escape?” (Tractatus in Ps. 118).

There are other examples we could give (just this morning I discovered a strong statement by Fulgentius of Ruspe as late as the 6th century that Mary was “conceived in iniquity in accordance with human practice” [Epistula 17.13]). And even among theologians who affirm Mary’s sinlessness, many do not affirm the immaculate conception. Augustine would fall into this camp (e.g., he speaks of Mary being “derived from the propagation of sin” in Genesi Ad Litteram 10.18.32).

What I find most interesting and noteworthy about these statements is the utter lack of controversy they produced! If belief in Mary’s immaculate conception was common in the early church, why did no one rise up to oppose them? This, combined with the lack of clear support for the immaculate conception in the first or second century (it possibly begins in the third, but is still very scant then), suggests that this doctrine was absent in the early church and thus not apostolic as Rome asserts! I’ve noticed a common problem with the Marian doctrines. They all lack proper biblical support, yet Rome asserts they were all believed continuously from the earliest period of the Church! This is dishonest.

The truth is that Mary, although favored of God, was an ordinary human being. Only Jesus Christ was immaculately conceived, born of a virgin, and born without sin. He was the only human being to live a perfect sinless life! It is a wicked affront to assert that a fallible human being who did not possess a divine nature was also sinless and perfect! Further the fact that there is virtually no biblical support for the doctrine, and the fact that this doctrine was unheard of until the mid 3rd century is compelling enough to conclude that no Mary was not immaculately conceived, and she was a sinner in need of a savior like us all.

Finally the best witness against this erroneous doctrine is Scripture itself:

“For all have sinned and fall short of the glory of God”- Romans 3:23

“Surely there is not a righteous man on earth who does good and never sins.” – Ecclesiastes 7:20

“Therefore, just as sin came into the world through one man, and death through sin, and so death spread to all men because all sinned” – Romans 5:12