Catholic apologists online, make a habit, I’ve noticed, of discrediting the great Reformed Martyr William Tyndale. They use fraudulent revisionist history to do this. I’ve lost count of the times I’ve seen Catholics dismiss Tyndale’s work as 3rd rate or “riddled with errors”. The truth is that Tyndale was a consummate scholar and ranked as the preeminent translator of his day. He was the Jerome of his generation! A master scholar of eight languages, Tyndale was meticulous in his translation of the Bible’s original Greek and Hebrew, and his style of English was uncommonly beautiful.

Tyndale’s translation of the Bible was simple but elegant. As his translation spread, his plain rhetorical style also spread and began to form the basis of a new English style, one that took common speech and elevated it into comprehensible prose. Some of the most famous phrases in the English language can still be attributed to Tyndale, including “and the truth shall make you free;” “eat, drink, and be merry;” and “the powers that be.” 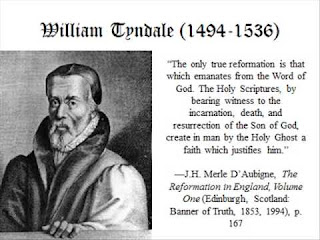 New translations made few changes to Tyndale’s work and wording. The Great Bible of 1539 was published by the royal authority of King Henry VIII just three years after Tyndale’s death. Ironically, this Bible was based on Coverdale’s Bible, which was essentially Tyndale’s translation with the parts of the Old Testament that Tyndale had not translated filled by translations of Latin and German versions.

The Geneva Bible was the first complete English translation of the Bible from the Greek and Hebrew. The Geneva Bible translators also consulted Tyndale’s earlier work, as would the translators of the 1611 King James Version of the Bible. In fact, 83 percent of the King James Version is based on Tyndale’s translation. Tyndale’s influence is evident in nearly every English Bible translation available today. The New International Version is based on the same principles demonstrated in Tyndale’s work—accuracy, beauty, clarity—and is inspired by his style and language.

One response to “William Tyndale defended”