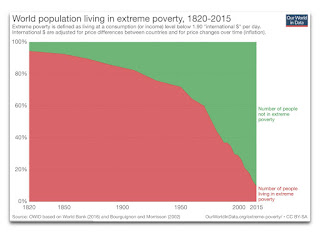 According to increasingly many Democrats in America, who fancy themselves as ‘Democratic Socialists’, the free market, using capitalist principles, has brought oppression, racism, income inequality, and poverty. This is a popular refrain from socialists like AOC, Bernie Sanders, and Elizabeth Warren. Is the free market actually guilty of so much evil? Not at all! While it certainly has problems, free-market capitalism has raised more people out of poverty than ANY OTHER ECONOMIC SYSTEM in history! I am against crony capitalism. I favor morally restrained capitalism, contra the “Greed is good.” of the 1980s Wall Street yuppies!

All the data we have is clear that in the past 200 years (1820 – 2020), the rates of poverty globally have been reduced dramatically thanks to capitalism.  Both baseline poverty rates, as well as extreme poverty rates, have decreased sharply under capitalism.

Millennials and Gen-Z are being brainwashed by socialist teachers to believe that socialism/communism is superior to free-market capitalism! Nothing could be further from the truth!

According to the following article:

In 1820, the total world population numbered around 1 billion people. Out of that 1 billion, demographers and economic historians have estimated that about 95 percent lived in poverty, and 85 percent in abject poverty. Only a small fraction of the human race had any form of material comfort, though we need to keep in mind that what was considered a comfortable existence in 1820 would be viewed as material wretchedness by most in the 21st century.
The world population has increased to over 7.6 billion people in 2018. The World Bank calculated that less than 10 percent lived in serious poverty in 2015. In 200 years, the population has grown by more than 6.5 billion people while poverty has sensationally fallen to less than 10 percent of the much larger total. If this trend continues, it is not unreasonable to anticipate that before the end of the 21st century, poverty will be a thing of the past.
All might not have the same standard of living in, say, 2075 or 2090. But the differences will likely be reduced to degrees of comfortable material enjoyment of life, not the dichotomy in which some have it while others do not. – https://www.aier.org/article/the-rise-of-capitalism-and-the-dignity-of-labor/

That is a dramatic, even miraculous, transformation!! In the past 20 years, nearly 1 billion people have been taken out of poverty thanks to capitalism! Listen to Bono, not AOC!