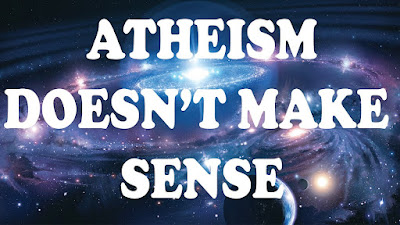 The fool says in his heart, there is no God! This is what Scripture says about atheists. They trust in their own deficient reason and convince themselves that God doesn’t exist. Yet as Scripture says, we know that deep down they know that God exists!

The arguments atheists use to deny God’s existence are usually really immature and not very well developed.

Here are some famous atheists last words before they died. You will see that apart from faith in Christ they are utterly lost and hopeless and enter death full of fear and dread!

1. CAESAR BORGIA—Italian nobleman, politician, and cardinal: “While I lived, I provided for everything but death; now I must die, and am unprepared to die.”

2. THOMAS HOBBS—Political philosopher: “I say again, if I had the whole world at my disposal, I would give it to live one day. I am about to take a leap into the dark.”

3. THOMAS PAYNE—The leading atheistic writer in American colonies: “Stay with me, for God’s sake; I cannot bear to be left alone , O Lord, help me! O God, what have I done to suffer so much? What will become of me hereafter? I would give worlds if I had them, that The Age of Reason had never been published. 0 Lord, help me! Christ, help me! No, don’t leave; stay with me! Send even a child to stay with me; for I am on the edge of hell here alone. If ever the Devil had an agent, I have been that one.”

4. SIR THOMAS SCOTT—Chancellor of England: “Until this moment I thought there was neither a God nor a hell. Now I know and feel that there are both, and I am doomed to perdition by the just judgment of the Almighty.”

5. VOLTAIRE—famous anti-christian atheist: “I have swallowed nothing but smoke. I have intoxicated myself with the incense that turned my head. I am abandoned by God and man.” He said to his physician, Dr. Fochin: “I will give you half of what I am worth if you will give me six months of life.” When he was told this was not possible, he said “Then I shall die and go to hell!” His nurse said: “For all the money in Europe I wouldn’t want to see another unbeliever die! All night long he cried for forgiveness.”

7. DAVID HUME—Atheist philosopher famous for his philosophy of empiricism and skepticism of religion: He cried loud on his death bed “I am in flames!” It is said his desperation was a horrible scene.

8. NAPOLEON BONAPARTE—French emperor who, like Adolf Hitler, brought death to millions to satisfy his greedy, power-mad, selfish ambitions for world conquest: “I die before my time, and my body will be given back to the earth. Such is the fate of him who has been called the great Napoleon. What an abyss between my deep misery and the eternal kingdom of Christ!”

9. SIR FRANCIS NEWPORT—Head of an English Atheist club, to those gathered around his deathbed: “You need not tell me there is no God, for I know there is one, and that I am in his presence! You need not tell me there is no hell. I feel myself already slipping. Wretches, cease your idle talk about there being hope for me! I know I am lost forever! Oh, that fire! Oh, the insufferable pangs of hell! Oh, that I could lie for a thousand years upon the fire that is never quenched, to purchase the favor of God and be united to Him again. But it is a fruitless wish. Millions and millions of years will bring me no nearer the end of my torments than one poor hour. Oh, eternity, eternity forever and forever! Oh, the insufferable pangs of Hell!”

10. CHARLES IX—The French king. Urged on by his mother, he gave the order for the massacre of the French Huguenots, in which 15,000 souls were slaughtered in Paris alone and 100,000 in other sections of France, for no other reason than that they loved Christ. The guilty king suffered miserably for years after that event. He finally died, bathed in blood bursting from his veins. To his physicians, he said in his last hours: “Asleep or awake, I see the mangled forms of the Huguenots passing before me. They drop with blood. They point at their open wounds. Oh! That I had spared at least the little infants at the bosom! What blood! I know not where I am. How will all this end? What shall I do? I am lost forever! I know it. Oh, I have done wrong.”

11. DAVID STRAUSS—Leading representative of German rationalism, after spending a lifetime erasing belief in God from the minds of others: “My philosophy leaves me utterly forlorn! I feel like one caught in the merciless jaws of an automatic machine, not knowing at what time one of its great hammers may crush me!”

12. JOSEF STALIN—Soviet Georgian revolutionary and politician. In a Newsweek interview with Svetlana Stalin, the daughter of Josef Stalin, she told of her father’s death: “My father died a difficult and terrible death. . .God grants an easy death only to the just. At what seemed the very last moment, he suddenly opened his eyes and cast a glance over everyone in the room. It was a terrible glance, insane or perhaps angry. His left hand was raised, as though he were pointing to something above and bringing down a curse on us all. The gesture was full of menace. . .the next moment he was dead.”

14. GANDHI—At his death, he said, “For the first time in 50 years, I find myself in the slough of despond. All about me is darkness. . .I am praying for light.”

AUGUSTUS MONTAGUE TOPLADY (1710-1778)
He will ever be famous as the author of one of the most evangelical hymns of the eighteenth century, “Rock of Ages,” which was first published in 1776. During the final illness, Toplady was greatly supported by the consolations of the gospel: “The consolations of God, to so unworthy a wretch, are so abundant that he leaves me nothing to pray for but their continuance.” Near his last, awaking from a sleep, he said: “Oh, what delights! Who can fathom the joy of the third heaven? The sky is clear, there is no cloud; come Lord Jesus, come quickly!” He died saying:”No mortal man can live after the glories which God has manifested to my soul.”

Only fools never learn from history, and it’s amazing that even in our days, with all these facts on our fingertips, someone with a mind can devote his entire life to a delusion, and want everyone to know that there is no God. No wonder the bible says, “Only fools say in their hearts, there is no God.” (Psalm 14:1)

MARTIN LUTHER (1483-1546)
Knowing the end was near, he wrote his last will and testament. It began with the words, “I am well known in heaven, on earth, and in hell,” a true statement of the result of his bold stance throughout his life. In his last moments, Luther was asked by his friend Justus Jonas, “Do you want to die standing firm on Christ and the doctrine you have taught?” He answered emphatically, “Yes!” Luther’s last words were: “We are beggars. This is true.” 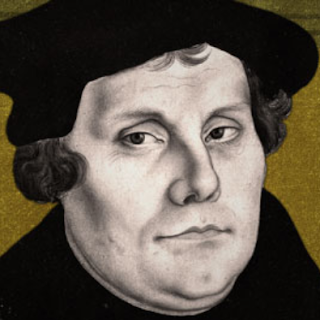 He died in Eisleben on February 18, 1546, within sight of the font where he was baptized as an infant. Luther’s body was carried to Wittenberg as thousands of mourners lined the route. Church bells tolled for their fallen leader.

Luther was buried, appropriately, in the Castle Church of Wittenberg. This was the very church where, twenty-nine years earlier, he had nailed his Ninety-five Theses. His final resting place was immediately below the pulpit, where he had so often stood to preach the Word

JOHN CALVIN (1509-1564)
During the last few months of his life, he slowed down but refused to give up. He was carried to the church to preach his last sermon on February 6, 1564. Two months later, on April 25, 1564, feeling it was time to make his will, he called Peter Chenalat, notary of Geneva, to his home and dictated to him:

In the name of the Lord, Amen. I, John Calvin, minister of the Word of God in this Church of Geneva, being afflicted and oppressed with various diseases…give thanks to God, that taking mercy on me, whom He had created and placed in this world…And I testify and declare, that it is my intention to spend what yet remains of my life in the same faith and religion which He has delivered to me by His gospel…With my whole soul I embrace the mercy which He has exercised towards me through Jesus Christ, atoning for my sins…that under His shadow I may be able to stand at the judgment seat. I likewise declare, that…I have endeavored, both in my sermons and also in my writings and commentaries, to preach His Word purely and chastely, and faithfully to interpret His sacred Scriptures…I also testify and declare, that…with the enemies of the gospel, I have acted candidly and sincerely in defending the truth. But woe is me!…I confess I have failed innumerable times to execute my office properly, and had not He, of His boundless goodness, assisted me, all that zeal had been fleeting and vain…As God is the Father of mercy, He will show Himself such a Father to me, who acknowledge myself to be a miserable sinner.

The second half of the will is devoted to distribution of the “slender patrimony which God has bestowed upon me” to various family members and friends. In the next month he quickly declined and died on May 27, 1564, shortly before his fifty-fifth birthday. 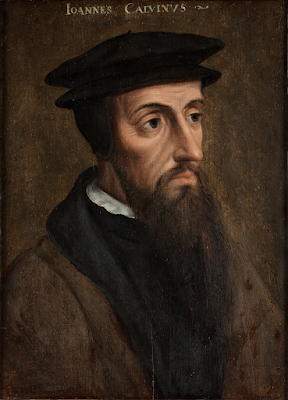 John Calvin worked tirelessly, almost up to his death, literally using up his life in the service of his Savior. May we all do so to His glory!