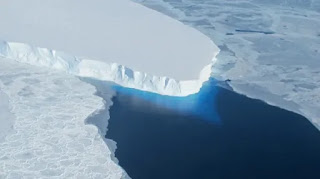 The ominously named Doomsday Glacier in Antarctica is at serious risk of total collapse within the next 3 years.

The Thwaites Glacier, otherwise known as the Doomsday Glacier, is approximately the size of Florida or Great Britain! It is the widest glacier on Earth, spanning roughly 80 miles (120 kilometers) and extending down between 2,600-3,900 feet (800-1,200 meters) to its grounding line (where the glacier transitions from being primarily land-attached to free-floating in the ocean).

The glacier is known as the Doomsday Glacier because it could trigger a cascade of glacial collapse in Antarctica with its collapse. During a briefing on December 13th during the American Geophysical Union’s (AGU) annual meeting, researchers have warned that it is at risk of collapse within the next three years. The ice mass is large enough to raise sea levels by more than two feet.

“And it could lead to even more sea-level rise, up to 10 feet (3 m) if it draws the surrounding glaciers with it,” said Ted Scambos, lead coordinator of The International Thwaites Glacier Collaboration (ITGC).

Climate change has already significantly impacted the Thwaites Glacier, which is estimated to have lost around 1,000 billion tons (900 billion metric tons) of ice since 2000. In the past 30 years, annual ice loss has doubled, and the glacier now loses about 50 billion tons (45 billion metric tons) more ice than it receives in snowfall per year. The speed of its flow has doubled in 30 years, meaning twice as much ice is being spewed into the ocean as in the 1990s.

A 2014 University of Washington study, using satellite measurements and computer models, predicted that the Thwaites Glacier will gradually melt, leading to an irreversible collapse over the next 200 to 1000 years.[20][21][22][23][24][25]

A 2021 study suggested that the Thwaites Ice Shelf, which currently restrains eastern portion of the Thwaites Glacier, could collapse within 3-5 years, leading to the contribution to sea level rise from the eastern portion increasing and eventually becoming equivalent to that of the other, undefended portions of the glacier.[8] Scientists do not claim that the entire glacier will collapse within 3-5 years, only the ice shelf which rests on the ocean and restrains the eastern portion of the Thwaites Glacier. The floating ice shelf acts as a brace that prevents faster flow of the upstream ice.[26] This would mean an increased outflow from the glacier and thus an increased contribution to sea level rise (increasing from 4% of sea level rise to 5% of sea level rise in the short term).[7][9] Under the hypothesis of marine ice cliff instability, the exposing of tall cliffs from the ice shelf’s failure may lead to a chain reaction of collapse over centuries[26], although the veracity of this hypothesis has been disputed by other studies.[27][28][29]

According to Ted Scambos, a glaciologist at the University of Colorado Boulder and a leader of the International Thwaites Glacier Collaboration, in a late 2021 interview from McMurdo Station, “Things are evolving really rapidly here. It’s daunting.”[15] At a meeting of the American Geophysical Union in New Orleans, Louisiana in December the situation was described as worrisome.[30]  — Wikipedia

The melting of floating ice as it makes contact with the ocean is a key reason why the glacier is coming unglued. Seawater that is a few degrees above freezing is melting the ice shelf from below. Warm water has recently been recorded near the Thwaites Glacier grounding line—the location where the glacial ice rests on the seafloor.

“What the satellites are showing us is a glacier coming apart at the seams,” said Ted Scambos, a senior scientist at the University of Colorado. “Every few years a new area seems to be letting go and accelerating. Like taffy being stretched out, this glacier is being drawn into the ocean.”

So global sea levels are expected to rise 2-10 feet in as soon as 3 years! This will be catastrophic for coastal cities. There doesn’t appear to be any way to stop it from collapsing. Unless Antarctica can replace the ice it’s been losing. Please pray!

Another study found that due to the Doomsday and Pine Island Glaciers melting global sea levels could rise 4 feet.

Here is some more information on the Doomsday Glacier.

And this isn’t the only massive glacier in Antarctica that’s been melting. The Pine Island Glacier has been deteriorating rapidly.