Some thoughts on America 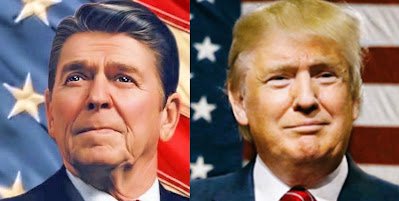 One of the things which I admire about President Ronald Reagan was his ability to work with Democrats in Congress, and have true bipartisan cooperation. Democrats and Republicans still had strong disagreements, yet for the common good they found ways to come together to benefit the citizens of our great country.

Today we rarely see such bipartisan efforts. Their is such rancor and acrimony between political parties. It’s so bad that we’ve had multiple government shutdowns where the federal government ran out of funding due to Republican and Democrats fighting each other. This should embarrass us as Americans. Our modern era seems to be one of hyper-partisanship and divisiveness. Your political opponents are demonized and seen as the enemy. Even very militaristic language is used by politicians and political pundits. Each side has their own niche media which mocks, ridicules, distorts, defames, spins, and misrepresents the other side., And each side has their own cult of personality celebrity stars who fill stadiums with their supporters cheering for them like they are rock stars.

The Trump rallies have always been very polarizing and a sort of bully pulpit for Trump to connect with his base. I didn’t like Trump’s divisiveness, and even the poisonous language he used when discussing Democrat (or even fellow Republican) opponents. It reminded me of ancient Rome and the Emperor giving a speech to the crowds at the Coliseum. Trump knew what his bloodthirsty base wanted and he was very pleased with himself for going there and denigrating his, and by extension their, opponents.

Trump’s rallies have disturbingly reminded me of the 1935 Nazi propaganda film “Triumph of the Will” by controversial director Leni Riefenstahl who directed, produced, edited and co-wrote the film. It chronicles the 1934 Nazi Party Congress in Nuremberg, which was attended by more than 700,000 Nazi supporters.The use of symbolism, the nationalistic flags and banners and chants, the throngs of adulating people focused on one man, and his near hypnotic, mesmerizing power over them. With a single phrase he can whip them up into a frenzy. The parallels between Hitler and Trump are too difficult to ignore. Also the way Trump outspokenly supported neo-Nazi thugs like the Proud Boys – akin to Hitler’s Brown Shirts. The Nazis Big Lie was the vilification of the Jews as the enemy of the German state. Trump’s Big Lie is the Stop the Steal narrative he keeps pushing (including in his 10 minute recent NPR interview where he storms out like a petulant child) which claims that the 2020 presidential election was rigged with massive voter fraud, and that he and not President Biden was the rightful winner. Federal judges appointed by Republicans found no evidence of this corruption and voter fraud, and Trump’s own political party, the Republicans in Congress, certified the election and declared Joe Biden the winner of the Electoral College.

I hope Trump doesn’t run again. I voted for him in 2016, but I quickly grew tired of his boorish and infantile behavior. A major newspaper documented that in 4 years Trump knowingly lied around 30,000 times! He is a pathological liar and a master manipulator. He is no Ronald Reagan! I believe Trump has some conservative policies, but I get the impression he holds to them for expediency and because he calculated that would resonate with a majority of Americans. His comments about grabbing ladies’ private parts are absolutely disgusting and shows he views women as mere sex objects. Trump is no Christian. No regenerated person trusting in Christ alone could act the way he has. It’s sad the Religious Right in America hitched their wagon to Trump. I lost count of all the pastors declaring that  Trump was God’s anointed. Many Trump supporters still believe this today and give blind faith in Trump as a sort of Messiah figure who will save America from Satan. The only way to save America is for millions of Americans to repent, believe the Gospel, and trust in Christ alone.

Another great blight on our nation was the January 6, 2021 attempted insurrection at Congress which Trump encouraged by telling his supporters that the presidential election was stolen from him. He also made remarks just before the violence started which emboldened those who took part in the attempted insurrection. America the great bastion of freedom and democratic fair elections was made a global laughing stock that day. Truly a shameful day in our history.

I feel a second term as president for Trump would be disastrous for our nation and he’d spend most of  his time trying to get even with everyone he feels has wronged him in some way – and it’s a big list. And telling tens of thousands of more lies. The Republican Party needs to cut ties with Trump and his entire family and back a true conservative Christian in the 2024 presidential elections.

We must fight back against this sort of thing, and get back to real news, substantive debates and rallies without demonizations and toxic distortions. Democrats also have guilt in this matter. Both sides need to do much better. We have to demand better of them and hold them responsible.

As a Reformed Christian it greatly distresses me to see the idolatry which tens of millions of American Christians have in Trump. We are to do what pleases Christ and to follow His Word at all costs. Trump is closer to a King Nebuchadnezzar, the Babylonian despot, than he is to King David. And I personally heard and saw Trump distance himself from Christian doctrine when at a prayer breakfast Trump said that he didn’t believe in loving his enemies or turning the other cheek. If Trump’s supporters can’t see  he is no man of God,  they are blinded by politics and not living faithfully as witnesses to the truth. Many of them are in deep denial, and are outright delusional in what lies and untruths they’ll believe. Every single insane QAnon conspiracy theory is taken as gospel truth by many Trump supporters such as US House representative of Georgia, Marjorie Taylor Greene.

I  truly hope we can break the Republican-Democrat two party system’s monopoly and elect to Congress and the Presidency truly Christian and conservative political parties. I’m hoping we can get back to Reagan conservatism.